The markets that rank highest in the Total Workforce Index™ are those with the highest relative performance across all four categories. The ability to perform well across two or more of the four main categories, make these five markets the most favorable for general workforce engagement.

Get a Custom TWI Analysis

Customize the Total Workforce Index or Request a Consultation

The top 5 markets, based on the rankings of the Total Workforce Index™ are led by three Asian Pacific (APAC) markets: Singapore, Hong Kong and New Zealand. Rounding out the top five are the United Kingdom and United States. Singapore rises to secure the top ranked position and Hong Kong moves into second, from top ranking in the 2018 Total Workforce Index™. New Zealand drops from first (2017) to second (2018) and now lands at the third ranked position due in part to a decrease in score in the productivity category. 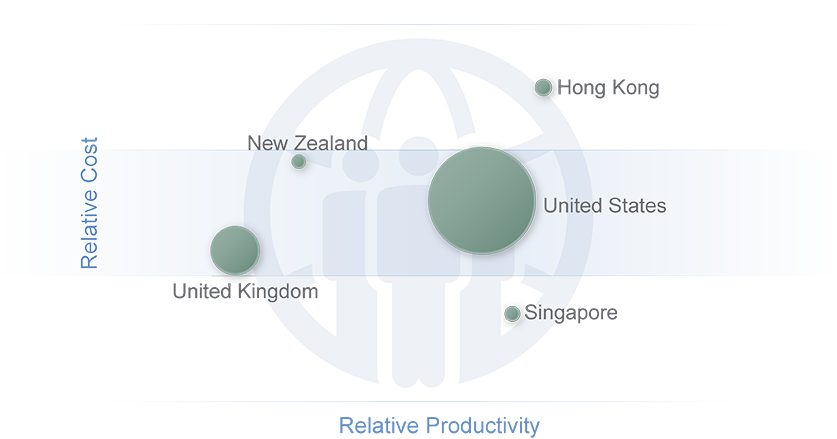 Despite some shuffling in the rankings year-over-year the top five markets consistently perform well and have been ranked in the top ten markets for a minimum of the previous four years. Regardless of the addition of over ten new factors and slight changes to weightings of the factors within the categories, these markets perform well because these markets all continue to mature at a consistent pace. These five markets are also so valuable from a workforce availability, size and skills perspective that these factors outweigh any factors related to lack of cost efficiency.

Comparison of the Top Five Markets for Workforce Availability 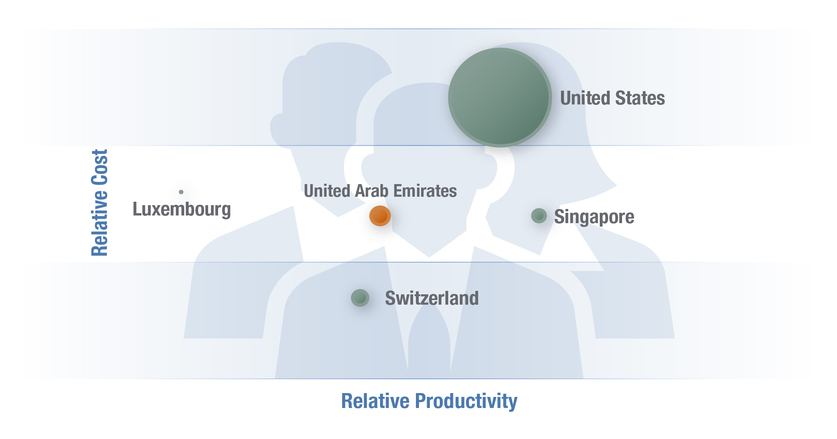 New Zealand returns to the top five availability markets this year following an absence in 2018. Singapore secures the top availability ranking away from Ireland who have dominated the top ranking for the previous two years.

While the United Kingdom drops another spot to the fourth position continuing it’s slide form second ranking in 2017. The influence of the added consideration for generational impact in workforce, addition of Spanish and French language proficiencies, and migration related to the separation of Britain from the European Union has contributed to the decline in ranking for the United Kingdom.

Singapore catapults from fifth to first. While Norway slips to third due to the rise of Singapore and pushing of Ireland out to second.

Comparison of the Top Five Markets for Workforce Cost Efficiency

Traditionally, the lowest cost markets also tend to be some of the least mature and generally have less restrictive regulation and availability. The Philippines is an exception. In 2017, the Philippines passed legislation to ban subcontracting and enforce restrictions on contract terminations. This speaks to another common trend among emerging markets, as investment increases in a market, so too does the regulatory impact in that market. 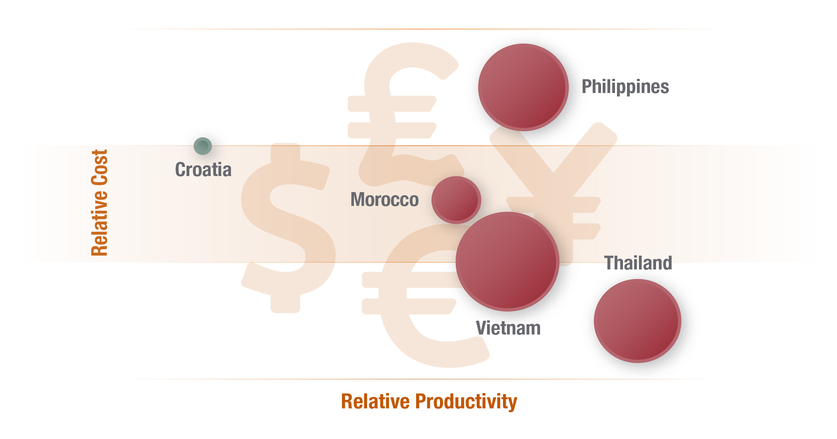 These and other changes in the Philippines have resulted in a decrease in cost efficiency overall. This held the Philippines at third in 2018 and allowed Morocco to rise from fourth to second place in the top five markets for cost efficiency that year. Despite being very appealing from a cost perspective, markets such as Morocco do not present significant opportunity for investment due to a lack of skilled and English-proficient talent, a small workforce and a restrictive regulatory climate.

Due to the influence of other cost related factors Morocco slips to the third ranking in 2019 pushing the Philippines up into the second position. While Thailand secured the top cost efficiency ranking for the third concurrent year. Thailand is a low cost, low tax, low wage market with heavy focus on industrial and increasing capability in technical skills. Thailand clinches this top spot for cost efficiency due to little to no overtime premiums, though the Philippines and Morocco are right behind it with a score only slightly below Thailand.

Comparison of the Top Five Markets for Workforce Regulation

Favorable regulatory environments are created when many types of workforce engagement are available to organizations and maximum contract lengths, notice periods and severance requirements are minimal or not required. The regulatory factors measured by the Total Workforce Index™ include topics such as severance and pension ages, geopolitical factors, contract limits and notice periods. More relaxed regulatory factors make these and similar markets more competitive for future investment in local employment. This is especially important in markets where the competition for certain skills is high. Some of these markets also have legislation that gives preferential visa treatment to immigrants with skills considered desirable in the current hiring market.

Comparison of the Top Five Markets for Workforce Productivity

Productivity is a category influenced by all three of the other categories. When the perfect mix of availability, cost efficiency, and regulation align with workforce planning initiatives, optimal productivity goals can be met or in some cases exceeded. However, the top five markets in Productivity may not necessarily be the most productive markets for organizations in all industries and sectors of business. 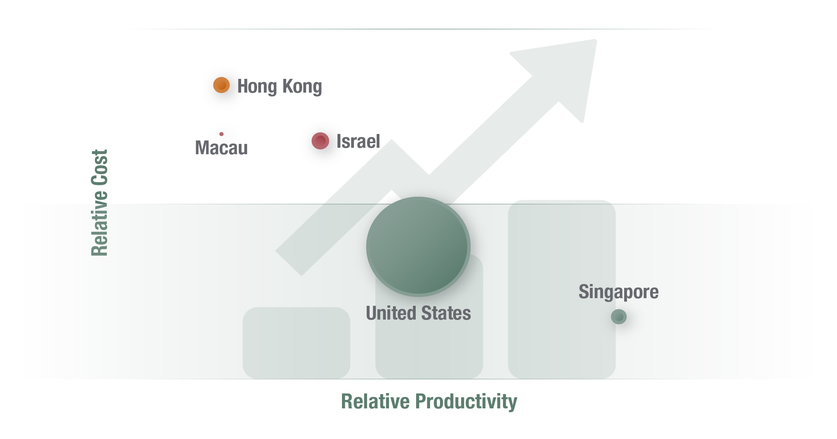 The improvements in technology infrastructure and wider adoption of technology in Israel are not enough to maintain the second ranked position obtained in 2018. Subtle changes to the factors that influence Productivity rankings were significant enough to add up to a shift in the ranked position of Singapore and Israel moving them back to their 2017 rankings.

Canada returns to the top five this year following its absence in 2018 pushing the United Arab Emirates out once again. Canada has remained mostly unchanged year-over-year across all productivity metrics. The ranking shifts seen in the top markets for productivity are indicative of the fact that a combination of several seemingly insignificant changes to multiple factors, can have a greater overall effect on the market rankings within a category. It also shows how changes in other markets can affect the rankings of markets that remain unchanged. This fact shows the need for additional analysis, beyond simple rankings, as it is often perceived that an increased ranking correlates directly with a positive improvement in that market.

As workforce experts, ManpowerGroup find work for millions of people around the globe every year, helping hundreds of thousands of companies attract, assess, develop, and retain skilled workers.